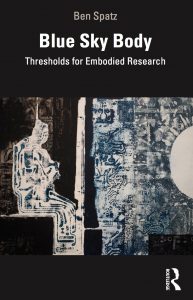 Blue Sky Body: Thresholds for Embodied Research is the follow-up to Ben Spatz’s 2015 book What a Body Can Do, charting a course through more than twenty years of embodied, artistic, and scholarly research.

Emerging from the confluence of theory and practice, this book combines full-length critical essays with a kaleidoscopic selection of fragments from journal entries, performance texts, and other unpublished materials to offer a series of entry points organized by seven keywords: city, song, movement, theater, sex, document, politics. Brimming with thoughtful and sometimes provocative takes on embodiment, technology, decoloniality, the university, and the politics of knowledge, the work shared here models the integration of artistic and embodied research with critical thought, opening new avenues for transformative action and experimentation.

Invaluable to scholars and practitioners working through and beyond performance, Blue Sky Body is both an unconventional introduction to embodied research and a methodological intervention at the edges of contemporary theory.

“Spatz’s first book, What A Body Can Do, was immensely helpful to me as an ethnographer in providing a vocabulary and conceptual framework to name and honor the hidden abodes of clandestine knowledges and the resistant performatives of local embodied practices. This book will be no less influential as an example of performative writing, offering another level in the discovery of “what a body can do” as first affordance, as well as showing how pedagogy can instigate threshold crossings, all in service of ethics and politics.”

—From the Foreword by D. Soyini Madison