The mission of Urban Research Theater is to forge new interdisciplinary, international, intersectional solidarities through critical embodied practice. Since 2004 it has served as an umbrella organization for artistic projects created by Ben Spatz and associates.

Urban Research Theater was founded in 2004 in Wroclaw, Poland, as ‘Badawczy Teatr Miejski‘. Since that time it has organized several hundred private and public events in the United States, United Kingdom, Poland, and elsewhere. 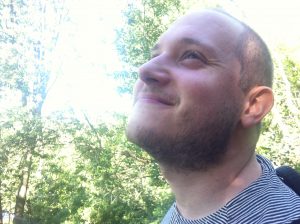 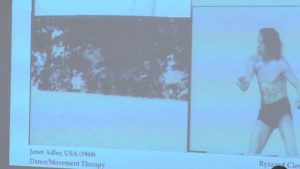 Ben Spatz is a nonbinary researcher and theorist of embodied practice. They are the author of What a Body Can Do: Technique as Knowledge, Practice as Research (Routledge 2015); Arts & Humanities Research Council Leadership Fellow (2016-2018); and Senior Lecturer in Drama, Theatre and Performance at the University of Huddersfield. Ben edits the videographic Journal of Embodied Research published by Open Library of Humanities and the new Advanced Methods imprint from Punctum book, as well as co-convening the Embodied Research Working Group within the International Federation for Theatre Research.

Previous phases of work can be traced back through 15 years of websites:

All materials on this website © 2004-2017 Ben Spatz / Urban Research Theater plus any additional co-authors.

Many of the materials on this website are available for public use according to the Creative Commons Attribution-NonCommercial 4.0 International license (CC BY-NC 4.0). You are free to share and adapt for noncommercial purposes, provided that you give appropriate credit including the names of all co-authors and a link to this site.

For other material, especially that which involves guest practitioners and performers as in several theatrical works created prior to 2013, specific permission must be obtained for any usage that exceeds quotation.

Please note that embodied technique is not subject to copyright and may be used freely for any purpose.