‘What do we document?’ 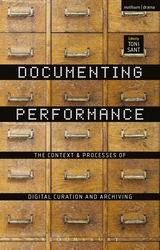 ‘Much recent thinking about performance documentation has coalesced around an apparent opposition between the relative stability of the document and the ontological ephemerality of the live event. Indeed, if we begin from the problem of translating a singular and ephemeral event into a stable document, then failure is guaranteed from the start. But the problem of documentation is illusory insofar as the performing arts have no special claim to ephemerality. As I have argued elsewhere, it is not performance but life in general — the world, the real, being itself — that escapes documentary capture. In fact, the questions faced by a documenter are not entirely different to those faced by a theatre director or choreographer who works through the craft of composition to condense various embodied and dramaturgical materials into a repeatable performance score. Nor do the spectators who attend such a performance necessarily have better or more direct access to the underlying processes that gave rise to it than do those who encounter the work through written or recorded documents. Understood in this way, documenting performance presents not the insoluble problem of grasping the ungraspable but rather the concrete challenge of isolating and articulating those aspects of a practice that can be shared and transmitted through the available tools…’

— from ‘What do we document? Dense video and the epistemology of practice’ in Documenting Performance: The Context and Processes of Digital Curation and Archiving, ed. Toni Sant (Bloomsbury, 2017): 241-251.