What a Body Can Do 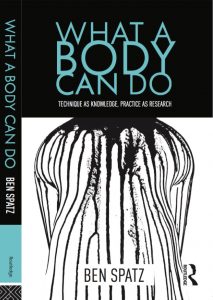 What a Body Can Do:
Technique as Knowledge,
Practice as Research

In What a Body Can Do, Ben Spatz develops a rigorous theory of embodied technique as knowledge. He argues that viewing technique as both training and research has much to offer current debates over the role of practice in the university, including the debates around practice-as-research.

Drawing on critical perspectives from the sociology of knowledge, phenomenology, dance studies, enactive cognition, and other areas, Spatz argues that technique is a major area of historical and ongoing research in physical culture, performing arts, and everyday life.

“What a Body Can Do is an important and ambitious contribution to interdisciplinary scholarship on embodiment and how embodied practices generate knowledge.”
— Phillip Zarrilli, University of Exeter

“What is taking place when bodies make their way in the world? In this book, Ben Spatz answers this question by providing an atlas of bodily techniques which generates new and vibrant epistemic impulses each chiming with the other. The result is both intense and intensely satisfying.”
— Nigel Thrift, University of Warwick

“This book is an important contribution to the interdisciplinary field of body studies. It is both deeply personal in its commitments, and deeply academic in its scope and quality. Chasing the performance of philosophy and the materiality of epistemology through its various limbs and organs, Spatz’s provocations continue to demonstrate that the body is ‘good to think with’ as a means for the discovery of new practices.”
— Chris Shilling, University of Kent

“Carefully weaving among the thickets, Spatz embraces concepts as wide as research, embodiment, performance, language, agency, the public sphere, gender, identity and everyday life. With much deftness, a strong thesis is developed… This is a brave story, adroitly told and offers a most valuable addition to the field.”
— Ronald Barnett, Institute of Education, London

Introduction: What Can a Body Do?
A body can …
Five stories
From performance to practice
Embodiment and sustainability
Methodology and chapters

2. The invention of postural yoga
Yoga and physical culture
A royal success
The yoga wars
Healthism and “performance”
Two studios in the East Village
The gendering of yoga
Between athletics and somatics
A therapeutic turn
What is physical education?

3. Actors without a theatre
Craft and presence
Beyond “actor training”
Stanislavski’s threshold
The method of physical actions
Grotowski’s legacy
Songs and other epistemic objects
A research culture in acting
Interdisciplinarities
Laboratories

4. Gender as technique
How to slice a cheese
Research in everyday life
The problem of sexual difference
Fracturing the feminine
Masculinities
Identity and inertia
Current research in gender
New paradigms

5. Embodied research in the university
Blue skies?
The epistemic impulse
“Practice as Research”
The archive and epistemic distance
Research design and methodology
The fourth division