‘From-ness: The identity of the practitioner in the laboratory’ 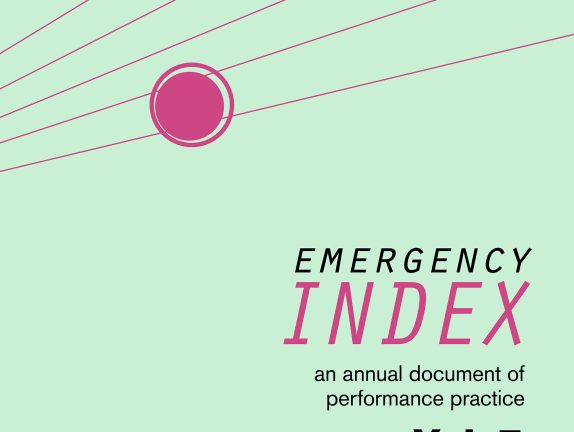 Emergency INDEX is an “Annual Document of Performance Practice” that welcomes submissions from anyone. You can submit your performance until the end of January for inclusion in this beautiful, thick, paperbound compendium. Each submission includes a B&W photograph and a description of the performance with a focus on underlying questions. I am a contributing editor with entries in most of the volumes and I reviewed the first volume for TDR. 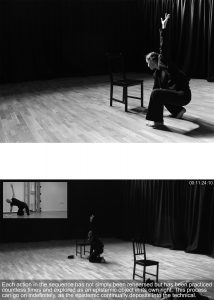 The Judaica Project investigates post-Grotowskian song-action through a dynamic work on Jewish cultural materials. Ben Spatz has been working on these materials since 2012 and with Jennifer Parkin and Sióbhán Harrison since 2014. During summer 2015 an entirely new practice structure was developed around the following elements:

The Judaica Project approaches embodied practice as research and strongly resists the assumption that performances only attain their reality as ‘works’ when presented before a public audience. Two “public” performances of this practice structure were offered on 21st and 22nd September 2015, however the structure was developed continuously between May and September and the ‘number of times it was performed’ during that period is indeterminate. The date given is that on which the attached photograph was taken (no public audience was present).

Below the photograph is a still from a ‘dense video’ documenting the Judaica Project. In addition to the main video, three meta-layers have been added to reflect the epistemic density of the documented practice: a smaller embedded video, showing the same practitioner working on the same song-action at another time and place; textual commentary below, analyzing the relationship between technical and epistemic (cf. Hans-Jörg Rheinberger) in the documented practice; and time code in the upper right corner, to allow for precise citation.